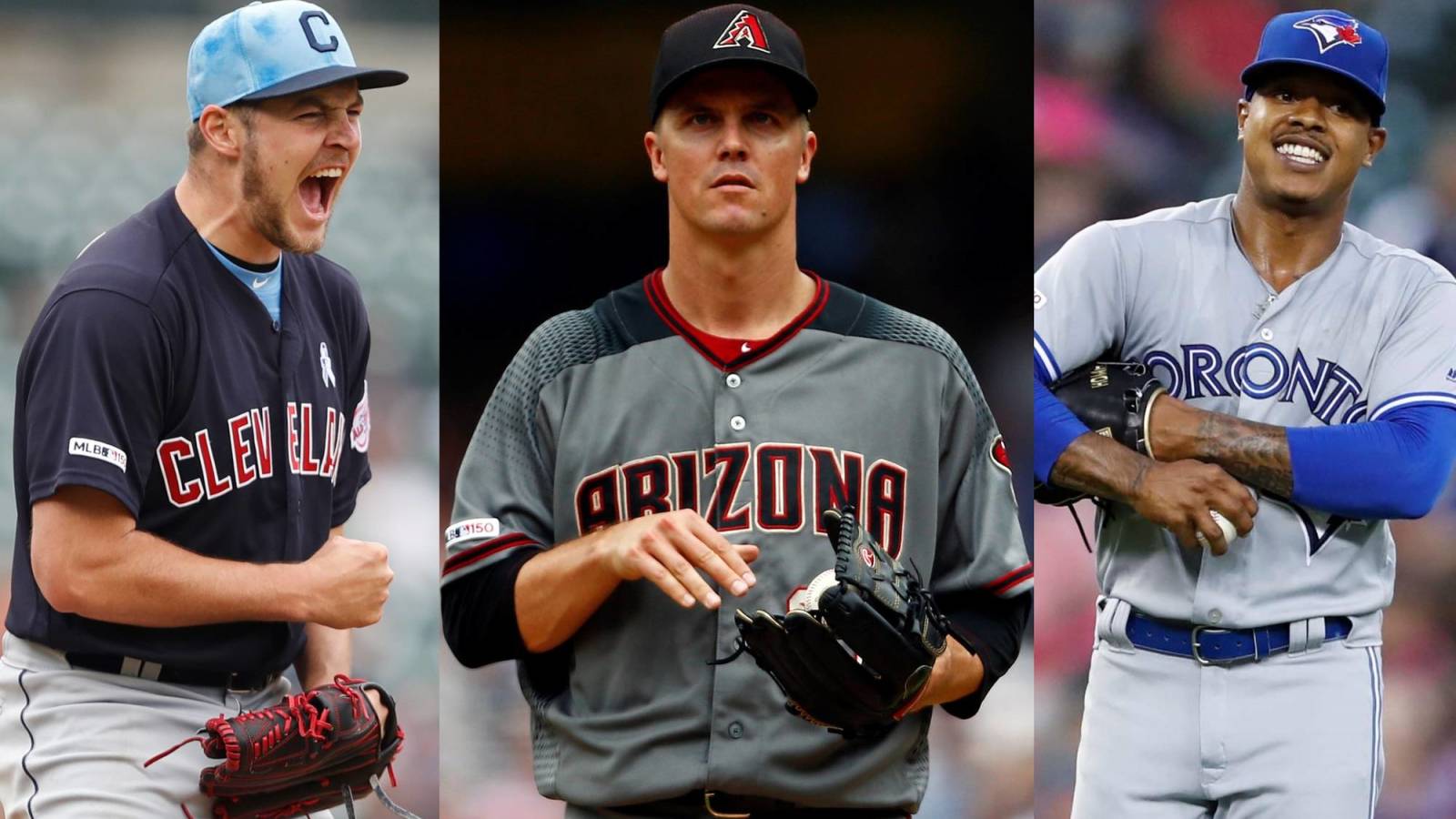 Major League Baseball’s trade deadline has finally passed, so we can all stop checking Twitter every 17 seconds. Plenty of minor transactions were made, but it was a blockbuster that made things wildly entertaining. Here are 10 things that stand out from Wednesday’s dealing.

Every legitimate contender in the American League could have used additional starting pitching for the stretch run. Although Houston was mentioned prominently in rumors involving hurlers Trevor Bauer and Zack Wheeler, the Astros ended up making a bigger splash than anyone expected. Shortly before the deadline, Houston executed a blockbuster trade with the Diamondbacks, trading for six-time All-Star Zack Greinke. All it took to close the deal were prospects. Surprisingly, Houston was able to keep its best minor leaguers, outfielder Kyle Tucker and pitcher Forrest Whitley. Alongside Justin Verlander and Gerrit Cole, Greinke gives the Astros an incredibly difficult rotation to knock out in October. He’s also excellent insurance for their 2020 rotation because Cole will be a free agent.

The Yankees are neck and neck with Houston for the best record in baseball, but that hardly means they are without flaws. New York desperately needed to add a quality starting pitcher — no member of its current starting five has an ERA under four. Cashman was interested in Marcus Stroman and Bauer, but once they landed elsewhere, his options dwindled. Robbie Ray could have been had from Arizona, but the southpaw has walked almost a batter every other inning, and his 3.93 ERA didn’t represent enough of an upgrade for the Bombers. Zack Wheeler and Madison Bumgarner were on Cashman’s radar, but he knew he would have to overpay the Mets, the Yankees’ crosstown rivals; the Giants never seemed all that interested in moving Bumgarner, the face of their franchise. New York’s options were limited, and Cashman was probably wise to not make a deal. Now the Yankees must contemplate a possible ALCS meeting against the Astros’ vaunted rotation.

3. The Braves think they can win the National League pennant.

The Dodgers and Braves have been the most consistent teams on the senior circuit. But the Braves’ bullpen has been a mess. Projected closer Arodys Vizcaino appeared in only four games before getting hurt and later traded, A.J. Minter and Chad Sobotka have failed to duplicate breakout 2018 seasons, and Luke Jackson has looked like a deer in headlights since he was pushed into a closer’s role. In fewer than 24 hours, most of those concerns have been alleviated. The Braves acquired right-handed setup man Chris Martin from the Rangers on Tuesday. On Wednesday, they added veteran righty Mark Melancon from the Giants and dominant closer Shane Greene from the Tigers. Greene is quite the get, as his 1.18 ERA and .153 batting average against look like they should be typos. Already armed with a dynamic offense, the Braves and their fortified bullpen may be enough to get Atlanta back into the World Series.

When was the last time a playoff contender traded its best starting pitcher ahead of the stretch run? I am waiting. Bauer was due to be a free agent after the 2020 season, and the small-market Indians were not eager to pay the salary he was likely to be awarded in arbitration this winter. But there was more to it than that. Clearly Cleveland had grown tired of the veteran’s curious personality, which was on full display earlier this week when he hurled a ball over the center field fence in frustration when manager Terry Francona headed to the mound to remove him from the game. While it was still surprising a trade actually went down, the Indians certainly did well in the transaction. In a three-way deal involving the Padres and Reds, the Tribe imported right-handed-hitting outfielders Franmil Reyes and Yasiel Puig, both of whom should give a struggling offense a shot in the arm. The Indians also added lefty Logan Allen and two other lower-level minor leaguers. But if Cleveland’s rotation struggles, this will be a bad deal.

5. The Mets aren’t exactly sure what they’re doing.

A few weeks ago, the Mets were a clear seller, but a hot streak since the All-Star break put them within range of a playoff spot. So they changed their minds. Kind of. On Sunday night, the Mets stunningly acquired ace righty Marcus Stroman from the Blue Jays. For weeks it seemed Mets starter Zack Wheeler would be dealt. But New York decided to hang on to him for the stretch run to see if it can qualify for the playoffs. Those moves alone were not what made New York’s deadline strategy curious. If the Mets were truly committed to going for it, they should have added bullpen help and a legitimate bench bat. It’s difficult to imagine the addition of Stroman and two unexpected months with Wheeler being enough to overcome this team’s shortcomings.

One of the best tweets of deadline day came courtesy of Jon Morosi, who reported about an hour before the deadline that the Dodgers and Pirates were locked in a “staring contest” over Vazquez that could ultimately determine the outcome of the World Series. That sounds dramatic, but it quite possibly could turn out to be true. The Dodgers have longtime stopper Kenley Jansen cemented in the ninth inning, and Pedro Baez has been solid as his bridge. But beyond those two, Los Angeles’ relief corps has been wildly inconsistent. Vazquez has arguably been the best reliever in the National League in 2019, and if the Dodgers had been able to secure his services, they would have had the majors’ best bullpen.  Los Angeles’ decision to not part with its best prospects for Vasquez might be heavily scrutinized all winter.

7. The Giants got caught in the middle.

Like the Mets, the Giants were clear sellers at the All-Star break, but a second-half surge has put them in a realistic position to make an October push. San Francisco had three highly sought relief pitchers and the best postseason starting pitcher of all time, Madison Bumgarner. It looked primed to set up the organization with several impact trades. In the end, the Giants ended up in no-man’s land. The temptation to move setup men Mark Melancon and Sam Dyson proved to be too strong, and San Francisco found willing partners in Atlanta and Minnesota, respectively. The Giants kept Bumgarner and All-Star closer Will Smith and traded for Reds second baseman Scooter Gennett. It was a surprising strategy, as it would appear the Giants would have been better served either retaining everyone for the duration of 2019 or executing the full sell they had planned earlier.

8. Boston wasn’t willing to make an aggressive trade for a reliever with the AL East out of reach.

Before spring training, every Red Sox fan would have told you Boston didn’t have enough in the bullpen. The first four months of the season have done nothing but reaffirm that thought. Boston has consistently coughed up leads all season, a primary reason it’s third in the AL East. Impact relievers clearly were available at the deadline. So why didn’t something happen? President of baseball operations Dave Dombrowski essentially told reporters that with the Yankees having the AL East all but clinched, the Red Sox didn’t feel comfortable dealing talented prospects for at best a shot at a toss-up wild-card game. That rationale made sense, but it did little to alleviate the frustration of fans in New England.

9. The Nationals didn’t have the same reservations.

Washington is not as far back in its division as the Red Sox, but it’s increasingly unlikely the Nationals will finish the season as NL East champions. The Nationals are probably playing for a potential wild-card entry, and entering August, they are in prime position to grab one of the invitations to the one-game playoff. In a full 180 from Boston’s viewpoint on that scenario, though, the Nationals felt good enough about their chances to add three difference-makers to a struggling relief corps. In the span of about 90 minutes Wednesday, Washington added Hunter Strickland, Daniel Hudson and Roenis Elias.

10. The Blue Jays are in the doghouse of GMs around the league.

In the most surprising deal of the trade deadline, Toronto sent ace righty Stroman to the Mets for minor league pitchers Anthony Kay and Simeon Woods-Richardson. Everything about that trade bothered executives in the game. First off, the timing was curious, as the Jays pulled the trigger three days before the deadline. They could have waited to see if a better offer materialized. While Kay and Woods-Richardson were the best pitching prospects in the Mets’ system, neither profiles as more than a middle-of-the-rotation starter. The deal was almost unanimously viewed as an instant coup for the Mets. The relatively small return Toronto got for Stroman hurt the market for pitchers like Robbie Ray. The Blue Jays will be looked down upon by their peers for the foreseeable future.