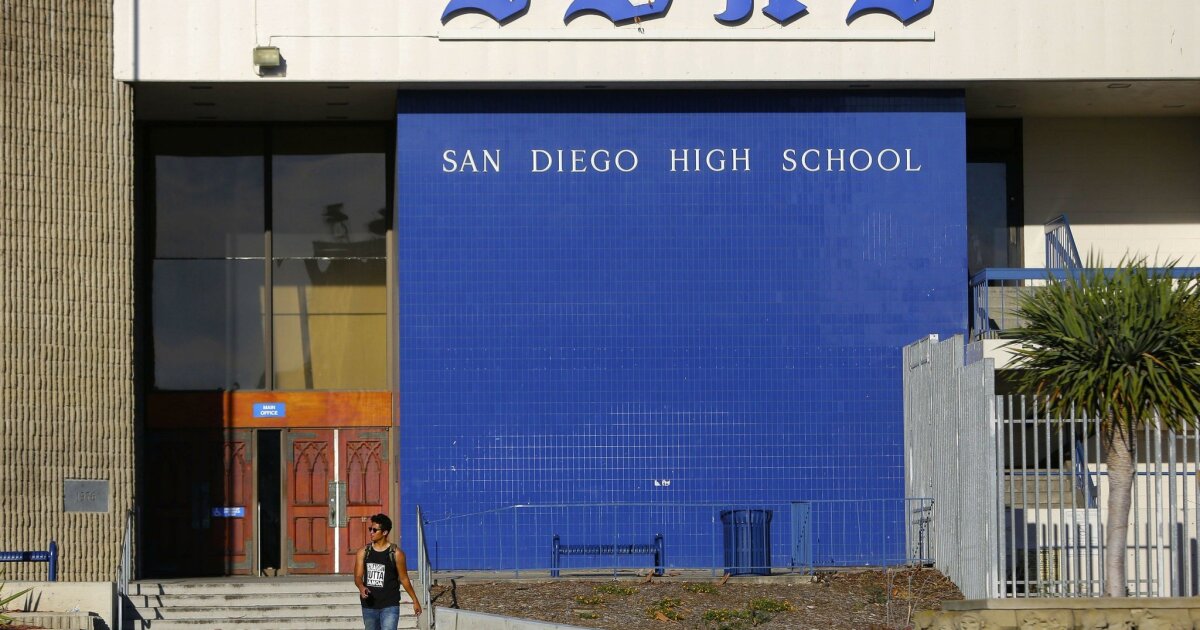 San Diego’s oldest high school could remain in its Balboa Park location for another century should a lease agreement that’s working its way through the approvals process find favor with city leaders.

Tuesday, the San Diego Unified School District Board of Education unanimously approved a draft contract that would keep San Diego High School in place at 1405 Park Boulevard for 99 years. The school district is not being asked to pay rent for its continued use of 34 acres of dedicated parkland, which includes Balboa Stadium. Instead, it would give the city two pieces of property that total around 12 acres. The district also anticipates making $30 million in improvements to the property over the course of the lease, according to the agreement.

The proposed contract, which is still in flux and subject to sign off by City Council, comes after voters approved in 2016 an amendment to the city charter to allow for a new school lease on parkland. If approved, it would terminate and replace the district’s existing 50-year, nearly rent-free lease agreement with the city that is set to expire in 2024.

“It’s been nearly three years since 77 percent of voters in the city of San Diego voted to keep San Diego High School … on its current location,” school board member Richard Barrera said at the district meeting. He added that the campus is in “desperate need” of improvements that are on hold because of the yet-to-be-executed deal. “I encourage Mayor (Kevin) Faulconer to encourage his staff to complete these negotiations so we can move forward.”

San Diego High originally opened as the Russ School in 1882 on parkland that was set aside in 1868 by city trustees. Its existence predates the version of Balboa Park that most locals are familiar with, and was allowed before non-park uses were prohibited on dedicated parkland.

However, the property, separated from the rest of the historic park by Interstate 5, has been the subject of land-use disputes over the years. In 1974, the school district sued to take ownership of the site through an eminent domain claim. The parties eventually settled on a court-approved lease agreement that was supposed to see the acreage transferred back to the city after 50 years. San Diego Unified also agreed to pay the city $10,000 as part of the settlement.

The proposed replacement agreement, in the works since early 2017, is dusting up a decades-old debate as to whether the city is giving away prime real estate for pennies.

“The city should either insist on a cash lease based on independently determined fair market value with lease proceeds going to a protected fund for park needs, or a fair market value land swap for the lease obligation,” said David Lundin, who runs the nonprofit Balboa Park Heritage Association and sought to block the charter amendment. “The voters approved a possible new lease when Charter Section 55 was amended recently. However, they only permitted a lease, not an unlawful give-away, bargain lease or insanely unfair land swap.”

The school district is seeking to exchange for its 99-year lease two properties of unknown value. The largest parcel is 11.73 acres. It is in the southwestern portion of Camp Elliott, near Mission Trails Park in Tierrasanta. The land, once planned for an elementary school, is zoned for residential development and has significant commercial value, a spokeswoman for the district said.

The second property is a 0.42-acre portion of Logan-Memorial Preparatory Campus already in use by the city.

“The city constructed a public pool partially on district school property,” the school district spokeswoman said. “Exchanging this property would allow the land under the pool to be owned by the city.”

Gary London, a local real estate analyst, said the proposed property exchange is not, on paper, an equitable swap.

The city declined to discuss the properties identified in the draft agreement, citing ongoing negotiations. It also did not say when a new lease might go before City Council.

“An updated lease between the city of San Diego and San Diego Unified School District would keep San Diego High School on the site it’s called home for more than 100 years. While we can’t comment on lease terms while negotiations are ongoing, the mayor endorsed the 2016 ballot measure to ensure the school continues its legacy without interruption for decades to come,” said Christina Chadwick, a spokeswoman for the mayor’s office.

Initially unaware of the draft agreement, Tomás Herrera-Mishler, the head of the Balboa Park Conservancy, said he wasn’t expecting the high school’s lease to help fund park operations. Nor does he think the school should relocate.

“I don’t think anyone is advocating for the high school to be removed from the park,” the nonprofit executive said, adding that the campus could be renovated to serve as a more handsome gateway to the city’s oft-called crown jewel. “I’m hoping that we can really use this opportunity to make an even stronger and mutually beneficial bond between the two.”